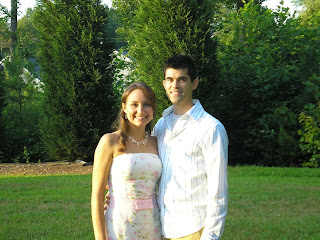 This week is definitely our party week! Tuesday was our 2 year anniversary and tomorrow is Stephen's birthday!
Stephen came by the office Tuesday with a beautiful bouquet of roses/baby's breath and took me out for lunch (so romanntic!)...that night we dressed up and enjoyed a tasty -very filling- dinner at Arigato's! After dinner we were brought a piece of chocolate cake with two candles in it and were serenaded with a song/drums :) I took Wednesday off and we spent the day in Charlotte! We walked around the mall, where I enjoyed my first crepe ever :), and then we both took in our first Ikea experience!
Tonight I will be decorating my Guitarmann's cake -and tomorrow we will have dinner with his parents, then have cake and presents at our place!
Posted by Manntastic at 11:15 AM No comments:

My latest claim to fame...

I just found out that I am in a Nascar/Victory Junction commercial that stars Kevin Costner!(No I've never met him) I was told by a friend of mine from Victory Junction (where I use to work)! This is a clip from the commercial - it goes pretty quickly and I'm only on there a second (maybe!)... Enjoy :)
Posted by Manntastic at 11:30 AM No comments: 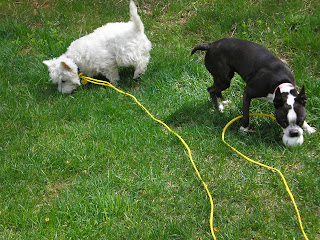 Lou came over Thursday to spend the weekend! He and Bella wore each other out! They had lots of fun inside, but not as much as outside!!In the first picture Bella got to the ball first, but was soon disappointed to find that Lou didn't really care! We had them hooked to each end of our 50' rope! They stayed within 50 feet of each other the whole time! :) :) 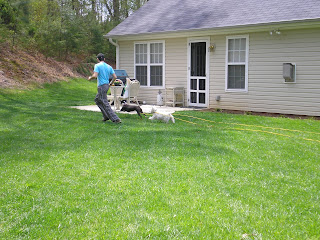 In the second picture they are chasing after Stephen! They did this for quite some time until Stephen could no longer run! Poor Lou had to run twice as fast as Bella to keep up,...but as you can see - he was able to hold his own!! :)

This last picture captures the peace in our home after a long day of running and playing! I had to be careful taking this picture, because when I would get out the camera - they both were sure that I was getting something out for them...which would, of course, ruin the moment! (And if you are trying to figure out what is on the TV...yes...it is Suze Orman!) 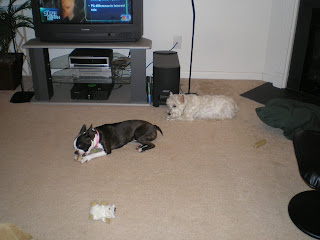 Saturday we did a lot of yard work! I planted flowers around the mailbox, in the hanging basket, along the back of the house and in the island! And I am still in pain from all of that!

Sunday we enjoyed part of 'Easter in the City' held at the coliseum! It was really good! Then, after letting the pooches play just a few minutes longer, we drove to Troy and enjoyed a delicious meal prepared by my mom! We had a good time with the family hanging out, talking about...everything :)...watching a movie and taking lots of fun pictures!!! It was a great Easter!
Posted by Manntastic at 11:49 AM No comments:

This one is for Blake...

...because I know how faithfully he checks manntastic...I thought I would share that Stephen and I enjoyed a tasty dinner at Five Guys with Blake, Ashley and Scott! We had a great time and learned all about Blake's business ideas (top secret stuff...I won't talk...so don't ask)! :)
So there you go - great friends, great dinner, great evening!

Yay for Krispy Kreme and Chick-fil-A!!!

So!!! We went to Kripy Kreme as promised on March 28th... I was more excited about it than Stephen was - until we found out that we not only received one free item off of the menu - but we also received a free dozen donuts!!! :) We got an assorted mix of our favorites...Stephen got an iced coffee and I enjoyed a Kool Kreme shake!! That was a good day! :)

Then...I heard on the radio last week that Chick-fil-A was giving a free breakfast a week, for a year, to the first 100 who showed up on Saturday morning. The line started at 9:00pm Friday and the prizes were given out at 6:00am Saturday! We got there about 9:15 and were numbers 19 and 20! We wore our wrist bands proudly and enjoyed music, games, free nuggets and ice 'dream'! :) Stephen participated in the jump rope competition, but the rope was a little short, making it very difficult... 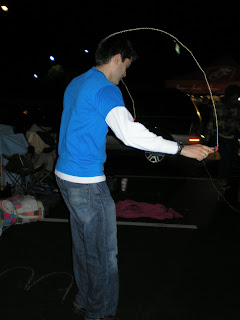 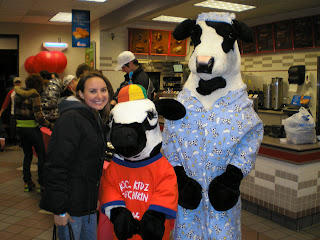 There was a line check every hour until 11:30... that is when we all got to go inside and eat ice cream - and when Stephen and I had the pleasure of meeting the two Chick-fil-A cows! The little one was SO cute! 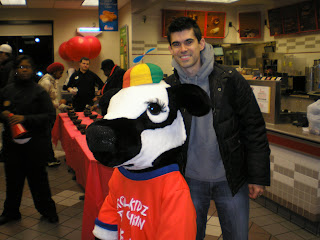 We set up our tent and air mattress around 12:30am, I stayed awake until about 1am - then slept on and off for the next four hours. Stephen stayed up the whole night and watched movies on his ipod! At 4:45am we packed everything up and were ready for the 5:30am line check...then we filed in at 6:00am for our gifts, which included little chick-fil-a cows, t-shirts, candy, toys...and of course, the vouchers!!!!!!! :) I slept a lot Saturday - Stephen only slept a few hours and then transformed the back yard with all the energy he had!!! :)

Posted by Manntastic at 7:54 AM No comments: 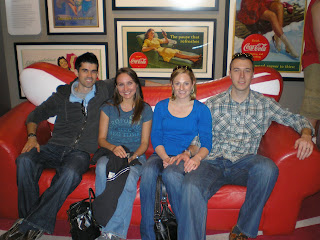 The 'fun weekends' haven't stopped!! Two weekends ago Stephen led worship for a middle school snow tubing retreat! He enjoyed snow tubing while Bella and I enjoyed girl-time! Bella is notorious for pouting when Stephen is gone for more than a few hours, and she didn't disappoint :) She just moped around and slept - which was fine with me!!
This past weekend we got to go to Atlanta and hang out with some friends! We got the nickel tour of the area, had lots of fun at The World of Coke (pictured above), enjoyed tapas at a hoppin' place downtown, and ended our stay attending North Point! We really enjoyed our time and the drive down and back wasn't too bad (easy for me to say since I slept a good bit on the way back!).

I'm looking forward to the new Krispy Kreme store opening this weekend!! Since I am on their email list (okay - so I love donuts!), Stephen and I got a special invitation that we must have in hand in order to partake in one free item from the menu! It doesn't get any better than that! :)
So,...there you go! snow tubing, atlanta and krispy kreme...life is good :)
Posted by Manntastic at 8:53 AM No comments:

Well, February 28th we went to Troy and had a good time with my family - we were slaughtered in a game of Cranium, but it was a lot of fun! March 8th we not only enjoyed the AMAZING weather, but also enjoyed the 'Bold' service at Green Street Baptist in High Point. Stephen played bass for both services - everything went well!

The spring-like weather has inspired some spring cleaning!! I've cleaned out the garage, the linen closet, & the top of the closet in the spare bedroom! I hope my 'cleaning mood' lasts another few days! That would be GREAT!

Well - that's all for now!!! Until next time, Correne.
Posted by Manntastic at 7:31 AM No comments:

Yesterday, Scott was given tickets to see Wake and Georgia Tech play - and graciously invited Stephen and me to go, along with Diane! (Don was not feeling well...)

We had a lot of fun and Wake played well! We were about 20 points ahead the whole game! The final score was 87-69! Go Deacs!
Posted by Manntastic at 7:05 AM No comments:

Hey! We have actually done some exciting things since posting Christmas lists! :-D I was waiting until I uploaded some pictures - but I guess those can continue to wait! :)

The week of New Year's we spent a few days at the beach! December offers great hotel rates and decent weather!! We had a lot of fun! It was good to get away!

February 7th-10th the Manns went to visit the Manns! Brian and Andrea are in Houston and have a new addition! Little Elliot Zachary!!! Elliot is very chill and Ethan (their 3 year old) is super sweet (he really likes the sound of my name so I got to hear "Aunt Correne" alot - it was cute!). We got to go to NASA while we were there, too, which was a cool experience!

Valentine's Day was special! Stephen got up before I did and (due to the fact that I sleep until something/someone wakes me up) he & Bella were able to go to Krispy Kreme to pick up some heart-shaped donuts, then he got roses, chocolates and a really soft stuffed bear - he set it all up on the kitchen table with a card! So thoughtful!!!! I just got him some of his favorite candy and a card :)

Well,...I will work on posting pictures!

Until next time...stay classy Winston Salem...
Posted by Manntastic at 7:35 AM No comments: